Some more thoughts on the new Canon EOS Rebel T3i. It might be more the fact that this is a newer camera than all my others, but the mount is very positive and tight. I was shooting in some pretty cold weather today, but the mount still has a tight fit and with a big lens is pretty important. I must say, that choosing to use this camera to do this test wasn't disappointing.


I was impressed with build quality and although it took me a few minutes to get used to the interface. I found it relatively intuitive and pretty quick to use. The fact that all the controls are in one hand is something to be said about the simplicity of design. I'm used to using both hands to change settings or press buttons on my 5Dmk2 and the 7D with the left hand, but frankly, this camera just in one hand is very well suited for quick setting and shooting without the need of the spare hand.

So on to our comparisons:
So here's the great news. Both lenses showed very little difference if at all. The new mark III extender is very sharp and manages to keep issues found in the older versions of the Extender down to a minimum. Now granted the the Canon EF 70-200 F/2.8L IS USM II is a fantastic lens, it certainly shows that the image quality loss is pretty minimal.


These crops show just how little difference there is between the two lenses. 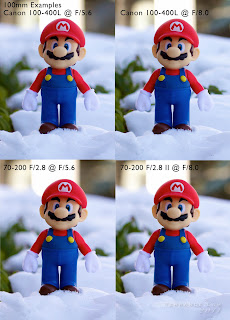 There is some difference, in fact the 70-200 with the extender might be arguably so slightly better. I really don't see much difference between the two at all, which means the great news is you can have a great 70-200 with the speed of the F/2.8 aperture and IS and switch to a 140-400mm F/5.6 lens by putting on the 2X Extender. The bad news is that AF speed is reduced by 25% as I understand, and the biggest drawback to this combination is that the 70-200 with 2X extender is going to be twice the price.

The next comparison that we did was to see how the 100mm range of both lenses compared. This time we took off the extender off the 70-200.

Here we start to see some more noticeable differences. The first thing observed was the background blur was actually smoother on the 100-400. Not sure what that was the case, but the 70-200 is a little more distracting.


One thing I did notice in the background is that the 70-200 does do a better job of controlling Longitudinal Chromatic Aberrations (LoCA).  There was also some CA along the edges on the 100-400 samples at F5.6 but as soon as both lenses were stopped down to F8, sharpness was the most obvious difference.

Overall I'm impressed with the combination, but at over $3200, you certainly will find it hard to swallow to pay double for that kind of reach. But if you're in the market, and can afford the 70-200 to begin with, be comforted in knowing that the new 2X extender wil give you excellent reach without huge image compromise.

One way you could look at this. Considering the 600D is a very nice camera, the amount of money you save purchasing this over a 7D or even a 5Dmk2, certainly easily pays for the difference with this lens over the 100-400L.

If you don't need the rapid 8fps, the weatherproofing or the weight, I'd say you'd be hard pressed to choose anything else but this odd ball combination.

Believe me if you will, you end up with fantastic image quality with a spectacular lens that covers most ranges for a fraction of the cost of the more semi-pro to pro set-ups.

If you're looking for the original 18MP images for your own comparisons, you may download them here: