This might seem like a silly or unfair comparison, but I decided to pit the 5Dmk2 with the Carl Zeiss Sonnar T* 50mm f/1.7 lens vs the Olympus Pen E-P3 with the Leica Summilux 25mm F/1.4.

Of course there's going to be some differences in the crop to DoF rendering in the background, but in reality, the Pen holds it's own well especially with the Leica lens on it.

Both systems render colour really well, and both lenses have wonderful background blur. The micro contrast on the Leica is much nicer, and being that the Carl Zeiss is a manual focus lens, takes more time to focus. Because the Pen's background blur looks more like an F/2.8 the advantage goes to the 5D in this regards.

Frankly though, considering the 5Dmk2 with this lens is still double the price of the Pen with the Leica lens the question for others should be is this worth enough of a difference to them?

Certainly the 5D to me still wins me over in regards to subject isolation, but the Pen isn't all that far behind. There's another Micro Four Thirds lens out there that might render the background closer to the Carl Zeiss (the Voigtlander 25mm f/0.95) but like 50 F/1.2 lenses and faster, they usually suffer from LoCA, soft images and other issues. These kinds of issues might render the wide aperture benefits a little pointless, but regardless it does mean manufacturers can make fast lenses for smaller sensors that gives the same look and feel of it's bigger cousins.   Frankly the Leica's micro contrast really makes this combination a super sharp portrait combination.

Even though this might be a comparison of apples to oranges, it does give some perspective that a compact body can be a strong contender to replace a big bag of large equipment. It would be much easier to run an event carrying only the 5Dmk2 with the 70-200 F/2.8 and the Pen with the Leica 25 F/2.8. Both would give me all the available light shooting that I could ever want and maybe more (with a shutter speed that is half of what I could get on the 5Dmk2 with equivalent F/2.8 DoF which is a huge benefit in my books while one struggles in the dark at F/2.8 my F/1.4 will work just fine.). 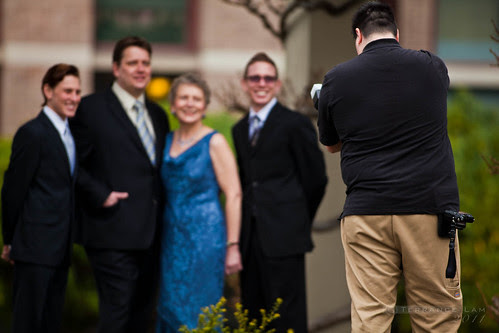 Wedding Photography on a Pen Budget - Olympus Pen That is