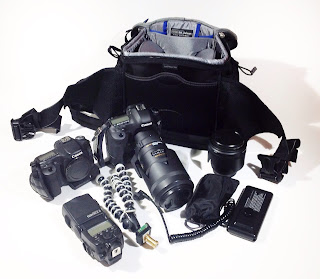 Continuing from my previous post about the Think Tank Speed Racer, I immediately took the opportunity to field test it at an event shoot.

Event shoots is certainly where I thought this bag would come most handy and although I had unrestricted access to all areas where I could have easily left my equipment locked up, I chose to wear the bag all night to see how well it would work out in cases where I wouldn't be able to put it down.

Running with the Speed Racer for 4 hours wasn't as bad as I thought it would be. Considering how much equipment I could put into it, the weight distribution worked out really well.

With both the shoulder strap and the waist strap, I did not find it interfering with my movements at all. I also ran a sling strap across the other shoulder so I could hang my camera from it when necessary. It feels as comfortable as a fanny pack, running mine across my left shoulder and the bag against my right hip all night. It was super comfortable and although the main body, battery grip and lens took most of the weight out of the bag, it still had some weight in it from my extra lens and other lighting accessories. As a side bag, it made it it easy for me to change out batteries, flashes, modifiers and even lenses. It's been the bag I've been looking for, for a long time. Being that I was covering a lot at the fashion show, I wanted to get behind the scenes stuff and also catwalk shots.

This evening I also had assistance by a young up and coming photographer, Meg Oram. She was my lighting assistant for the early part of the evening and we had a lot of fun lighting up the behind the scenes with my Elinchrom Quadra Rangers in a beauty dish. My behind the scenes shots were all shot with the 85mm F/1.4, on axis Speedlite 580ex and the rangers in the beauty dish.

The rest of the evening I spent down at the floor photographing the models and dresses by the very talented designers from the Pacific Design Academy's Fashion Design Program. I shot most of the night with the Sigma 85mm F/1.4 and although I switched at one point to my Sigma 70-200 F/2.8 HSM OS with my Speedlite 580EX on axis. The Think Tank Speed Racer really worked well to contain my battery pack for the flash, but also when I switched modifiers from mini-softbox to Stofen Omni bounce cap. I actually found the little access port at the top handy at times, but eventually I ran it unzipped at the top as it is very difficult to accidentally flip it open. I had no issues running it unsecured, although I do think a simple little velcro tab would not go unwelcome. I decided later in the evening that there was enough light for the 5Dmk3 and shoot the rest of the evening with just the 85mm F/1.4. Now to be reasonable here, the lighting was horrible. A mix of sodium vapour mall lights, and some movie production spot lights, however, I decided I wanted to see how this would work out with the new 5Dmk3 in this combination. Again the Speed Racer was indispensable as I shed much of the weight of my equipment and put it right into the bag without any concerns. Now conventional wisdom would also say that shooting the 85mm wide open might be a bad idea, but since I was having fun anyhow, I thought I would push the 5Dmk3 to shoot with all zone focus points. This is a group of 9 AF points that I had set up at the top upper most part of my frame. Normally I would only set it up with a single AF point and also set my aperture to F/2 to F2.2. I decided to shoot wide open and for the rest of the evening. The results were above expectations. The new AF system of the 5Dmk3 held up like a charm. I took about 1100 shots the entire evening and I would say that I nailed more on focus shots with the 85mm then I did with the 70-200mm F/2.8 zoom combination. All this with available lighting, and also mostly shooting JPG. Not only did I love my new Think Tank bag, but loved how all my equipment worked together with it. I ended the night a little sore carrying all the gear I did carry with me, but the one area of usual concern that wasn't sore was my shoulder. The equal distribution of weight across my waist and my shoulders made for a much easier versatile system. If you're an event shooter and carry a mix of a couple of lenses and flash lighting equipment, I highly recommend this bag. I was bending up and down and moving through the crowd with relative ease.


I might also recommend that if you do have an assistant and don't like carrying your bag, that this would be a great one to stick onto them. Regardless of who has it, it will be a more convenient system than most bags or backpacks, and I'm certain, at least for myself, that it will get well used by me for many years to come.